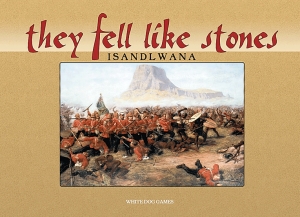 THEY FELL LIKE STONES: Isandlwana is a solitaire tactical simulation of the January 22, 1879 battle. You control the British Imperial forces and solitaire rules govern the Zulu side. As the Imperial commander, you must array your forces as best you can to meet the Zulu attack. Several scenarios are available including the full use of Glyn's Detachment, which historically was sent off on a wild-goose chase, dividing the Imperial forces.