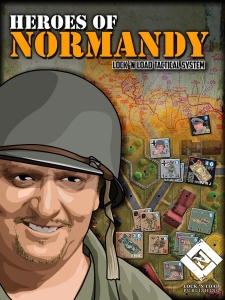 The award-winning, squad-level Lock ’n Load Tactical Series jumps into Western Europe in 1944 with Heroes of Normandy. From the initial D-Day drops, on June 6th, to the fighting in the Norman bocage, and on to Operation Market Garden, this combination of Band of Heroes and its expansion, Swift & Bold, arrives at the battle heavy, with 30 scenarios, over 650 die-cut counters, and the latest v4.1 rules. Command audacious American and British paratroopers and glider troops in daring missions against stalwart defensive positions and fiendish counterattacks by the German Wehrmacht, SS and Fallschirmjägers.

Infantry squads and intrepid individuals, such as skilled Leaders and Heroes, are at the core of the LnL Tactical Series. With them you can fire M1919A4, Vickers, MG34 and MG42 machine guns; take aim at approaching tanks with Bazookas, Piats and Panzerfausts; and find the range with heavy mortars and numerous anti-tank guns, from the American 57mm to the dreaded German 88mm. Vehicles, especially tanks, also clatter onto the battlefield to take on pesky infantry and, of course, each other. M4A1 Shermans, M5A1 Stuarts, Fireflies and Cromwells square off against Panzer IIIs and IVs as well as the big cats: Panthers and Tigers.

It’s squad-level tactical combat at its most exciting!

Requirements: No other product is required to play this game.