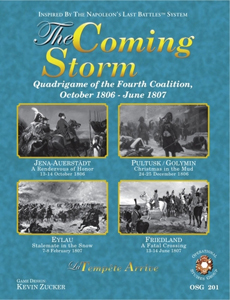 These four games explore the major battles of 1806-07, where the French Army encountered two different opponents with different capabilities, from the leadership-challenged Prussians in Saxony to the chaotic battle conditions in winter against the Russians. Based on OSG's Special Studies, which provide a turn by turn narrative of the four battles. Each game shows the approach to the battlefield on the day before battle. The Jena-Auerstädt game has both battlefields on one map and allows both sides to re-deploy before battle. Set at the scale of Napoleon's Last Battles-525 yards per hex and one hour turns-the game retains the Command System of Commanders and Corps Officers.