Heroes of the Motherland (boxless) 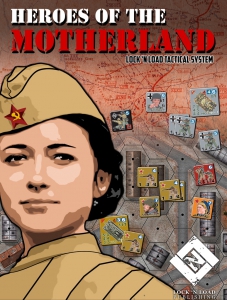 The Lock ’n Load Tactical Series advances into World War II’s Eastern Front with Heroes of the Motherland. The fate of the Soviet Rodina is at stake in 12 scenarios depicting ferocious battles across the Russian steppe, in the ruins of Stalingrad, and in Partisan-infested woods. From infantry spurred on by Commissars to intrepid Guards and stoic Partisans, the Soviets are poised for anything the German Wehrmacht and SS throw at them. It’s soldier against soldier and tank against tank. No matter the forces or the setting, the Soviets are poised to defend their homeland to the end.

Heroes of the Motherland is a complete module, utilizing all the scenarios from the expansion module Not One Step Back, and containing all necessary components from Band of Heroes and Swift & Bold, as well as new Maps that eliminate the need for overlays—that’s 14 Maps in all!