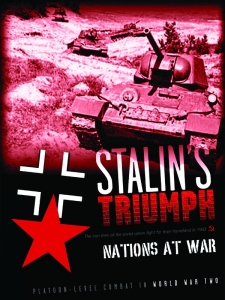 The Clash of Steel at Kursk

It is a matter of profound indifference to the world whether we hold Kursk or not. So why do we want to attack in the East at all?

You're quite right. Whenever I think of this attack my stomach turns over.

It’s July 1943, on the endless plains of Russia, in a clash of the giants, the Soviet Red Army defends the Motherland against its German invaders from such fearsome formations as the 2nd SS and 11th Panzer Division. Centered on the area of Kursk in 1943, Stalin’s Triumph places you in the fighting in and around the northern and southern flanks of the battle.

Stalin’s Triumph is the third game in the Nations At War series. Stalin’s Triumph depicts platoon level combat on the Eastern Front during World War II. All of the vehicles, men and weapons of the Soviet and German armies that fought in and around the area of Kursk in the summer of 1943. The game includes Soviet units such as the famed animal killer, the SU-152, and the workhorse of the Soviet Army, the T-34. For Germany, there’s a wide array of hardware such as Tigers and Mk IVs, but also unique vehicles such as the Flamepanzer and the dreaded Elephant. Included in the game are new rules for tank riders, commissars, fighter planes, goliaths and rockets. Battles depict actions around such famed areas as Prochorovka and Ponyri.

Stalin’s Triumph uses the newly developed v2.0 Core Rules Edition and also includes our new design your own scenario generator. This will add hours of play to your game.