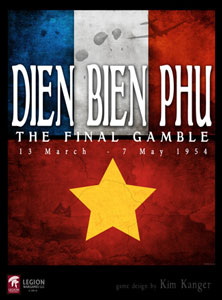 Dien Bien Phu - 2nd Edition is an extensive redesign and upgrade from the 1st edition which was released 5 years ago. So much has changed that each and every component has been updated and thus there is no "upgrade kit" available for those that own the 1st Ed. The bottom line is that if you liked the original game you will love this version as it takes a game that some describe as "possibly the best wargame design" to "the best game just got better".

The game depicts the decisive battle which took place in a distant jungle valley in northern Vietnam. It was a battle where both sides knew from start would be a final showdown. The French were desperately seeking for an opportunity to bring the Viet Minh main battle force into battle on French terms. Dien Bien Phu was a trap where superior units and weapons would crush the Viet Minh onslaught. Viet Minh felt they could not win the war unless they managed to upgrade their mode of fighting into a full scale war. The French were too strong in the delta but in a distant valley they had gathered almost all their best units without whom France would lose their will to continue. Dien Bien Phu was the place where France would be dealt a crushing defeat.