The Devil's to Pay! 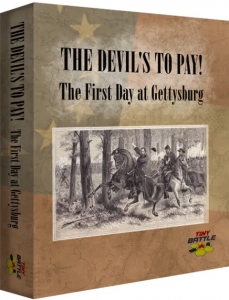 The First Day at Gettysburg

On the morning of July 1st, 1863 a column of Rebel soldiers from Brig. Gen. James Archer’s brigade of the Army of Northern Virginia headed down the Chambersburg Pike from Cashtown, PA towards the town of Gettysburg in search of provisions. Since JEB Stuart’s cavalry was nowhere to be found, the Confederate column was actually being led by the cannons of Pegram’s Artillery Brigade in a rare 19th century deployment of “recon by fire”. Archer’s Division commander, Maj. Gen. Henry Heth, was not worried however – he had it on firm authority that only militia was in the area and that “they would run as soon as we appeared”. Upon their approach up to Herr’s Ridge to the west of Gettysburg, the dismounted Union cavalry pickets of Buford’s 1stCavalry Division began harassing the approaching butternut columns. As they were driven off and the Rebs crested the ridge, they were confronted with a far larger cavalry force than they had anticipated and they were now hotly engaged in an unexpected encounter. Archer’s men, along with the quick-marching soldiers of Brig. Gen. Robert Davis’ brigade, began a coordinated advance on Buford’s horse soldiers. The blue-clad troopers were hard pressed but their carbines allowed them to fire rapidly and from cover. Relief finally appeared at about 9:30 am when Maj. Gen. John Reynolds of Ist Corps rode up to Buford at the Lutheran Seminary. He then famously asked Buford, “What’s the matter, John?” Buford’s reply was “The Devil’s to pay!” And from such inauspicious beginnings started one of the greatest battles of history. This first day was to set the tone of the entire three-day Battle of Gettysburg …. a first day in which ultimate victory or defeat for either side could be traced to the decisions, maneuverings and fighting performances of each army’s soldiers and leaders during these initial critical hours.

The Devil’s to Pay!is a game depicting not only the events of that first day at Gettysburg, but also what could have happened on that fateful day. Two players will each command either the Confederate forces of Lt. Gen A.P. Hill and Lt. Gen. Richard Ewell or the Union forces of Reynolds and Maj. Gen. Oliver Howard. The game is played on a gorgeous map of the battle area designed and drawn by Rick Barber, with each hex equaling 250 yards. Units are multi-counter brigades, with each Strength Point representing about 100 men, and these brigades are organized in groups of regiments as they were deployed at the battle. The system is a new version of the Blind Swords system, with this implementation emphasizing ease-of-play and accessibility while maintaining the popular spirit of “historical chaos” represented by the other games in the Blind Swords family. This system utilizes a unique chit-pull mechanic that will keep players on their toes and engaged throughout the entire game.

The Devil’s to Pay! contains the following: