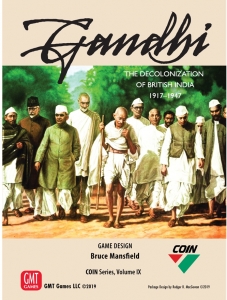 In 1917, a minor figure in Indian politics thrust himself onto the world stage and soon became the inspirational leader of the most successful nonviolent movement in world history. Mohandas Gandhi waged a decades-long campaign of civil resistance against the mightiest empire the world had known and won independence for the people of India. Their struggle would become the model for people across the globe, from the Civil Rights Movement in the United States, to Solidarity in Eastern Europe and the People Power Movement in the Philippines. But the story of India in the waning years of the Empire does not belong to Gandhi alone.

India had always been defined by its diversity, home to a wide array of cultures, languages, religions, ethnicities, and polities. Gandhi’s movement was one of many that evolved in those decades. The image of Gandhi in the popular imagination—Gandhi the saintly figure, the father of free India—oversimplifies the past and overlooks the important contributions of others. These ever present fault lines threatened to split India apart. The Muslim League increasingly agitated for Muslim autonomy and was willing to compromise with the British to achieve it. Across India, revolutionary groups formed and challenged Gandhi's nonviolent approach by waging armed struggle against the British. Periodic eruptions of terror and assassination were met by mass arrests and British reprisals. These may have restored order for a time, but such repression only fueled the next uprising. British power in India was always a balancing act, an act that became increasingly difficult to maintain as resistance across India grew. In the end, was it Gandhi’s nonviolent movement that ultimately toppled the Raj? Or was it the accumulation of years of unrest of all types that ultimately led to the decolonization of the largest dominion of Imperial Britain?

Gandhi: The Decolonization of British India, 1917–1947 is Volume IX in GMT’s acclaimed COIN Series. Exploring one of the world’s most prominent experiments with nonviolent resistance, Gandhi takes us to the subcontinent of India, the jewel in the crown of the British Empire, for a detailed look at the final decades of the British Raj. 1 to 4 players compete to determine the future of India; will the transition to home rule be a peaceful one, will India be split apart by partition or civil war, or will it remain firmly in the grip of empire?

Gandhi offers a fresh perspective on the history of insurgency with the addition of a new type of faction to the COIN Series, the Nonviolent (NV) faction, while retaining the multi-faction, asymmetrical, card-assisted system of earlier titles in the COIN Series. COIN veterans will be able to jump right in. Other features include:

Nonviolent activists that are immune from Raj actions until engaged in Protest.

Protests that build Opposition but leave Activists vulnerable to arrest by Raj forces.

A Unity track that measures tensions between Hindu and Muslim communities.

A Restraint track that measures the severity of the conflict in India, affecting the cost of Raj Operations, and the Nonviolent Protests and Revolutionaries Unrest.

British Viceroys who come and go with each passing campaign and give the Raj faction a unique capability.

Independent Princely States that are never controlled by any Faction, yet offer a haven for violent and nonviolent insurgents alike.

Muslim States that are placed during the game by the Muslim League, creating protected areas possibly to become the future nation of Pakistan.

Main and Short scenarios that allow for the study of different periods of the struggle against British rule in India.

Each of the four factions in Gandhi bring their own capabilities and challenges:

As Gandhi and the Indian National Congress, you have a host of nonviolent tools to break the British grip on India, but how will you achieve your goals while keeping the vast subcontinent united? You need to convince the people of India to shed their reliance on the British and reclaim their independence as a free nation. You need the support of the Muslim League but how will you keep the Muslims from splintering to form their own state? While you have rejected violence as the means to achieve independence, the Revolutionaries have not. How will you restrain their activities while avoiding being swept into British jails during raids?

As the Muslim League, you have also adopted nonviolence as your tool for achieving independence, but seek a different goal than Gandhi’s Indian National Congress. Concerned for the fate of Muslims in a future India dominated by Hindus, you fight for the establishment of a free Muslim India—the promised nation of Pakistan. But how will you foster support for a separate Pakistan without allowing India to slip into a bloody civil war between Muslims and Hindus?

As the Revolutionaries, you seek the immediate end to British Rule in India. You are willing to use the traditional tools of violent rebellion—unrest and assassination—to achieve your ends. India is vast and its cities and provinces offer many hiding spots from which to plot your next strike. But each move risks violent British reprisals and the ire of the nonviolent factions. How do you keep the British off balance while not playing into the hands of Congress or the Muslim League?

As the British Raj, you face the difficult task of governing the large and populous colony of India. Can you maintain order and support for the colonial government in the face of determined resistance? You have the resources of a great imperial power, but India is vast and the insurgency against British rule is widespread. How can you maintain both control over the colony and the continued support of its people?

In Gandhi, players will face a range of difficult and interesting strategic choices. Following in the innovative footsteps of previous COIN titles, Gandhi weaves together historical, political, and cultural threads and offers an opportunity to study nonviolent and violent resistance in one of the most significant colonial possessions from the age of European imperialism. Civil disobedience and non-cooperation, protests and unrest, imperialism and constructive programme, negotiation, assassination, persuasion, martial law, and many other options await.