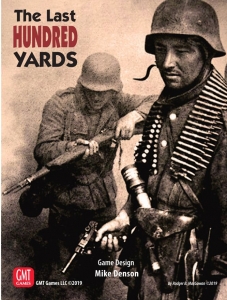 The Last Hundred Yards is unlike any tactical wargame published to date. It introduces innovative systems intended to model Small Unit Behavior in Combat during WW2. It is fun, fast-paced, and provides a very good simulation of what it was like to command combat units at the platoon or company level. The game is purposely designed to deliver a brisk yet intensive gaming experience that forces many decisions upon you as you take command of an infantry company in Western Europe after the D-Day landings.

I had the opportunity to play several scenarios of Mike Denson’s Tactical Game Rules Set “The Last Hundred Yards.” I found the ideas included to be both innovative and fun. His system for handling initiative and reaction shed new light on how units behave in a tactical setting. Fire systems are straightforward and make sense—even indirect fires work cleanly and fast. Infantry fights are shown in a way that warmed the heart of a crusty infantryman like myself. I recommend a look for any player with a solid interest in this level of combat. - Dean Essig of The Gamers & MMP

Here's a look at the major innovations and the designer's thinking behind the systems featured in the The Last Hundred Yards:

Initiative and Advantage: In The Last Hundred Yards, only the player winning the initiative has a proactive game turn; his opponent is limited to reaction only. Generally, the attacker has the initiative or momentum at the beginning of a small unit combat as the result of plans and preparation, so he generally dictates the action. The defender will generally react to the attacker's actions, hoping at some point to blunt or take away the attacker's momentum. This is represented in The Last Hundred Yards by player advantage and the importance of winning the initiative.

Simultaneous vs Sequential: In small unit combat, things are happening simultaneously. In an attack on an enemy position, some units of a formation provide cover fire to suppress the enemy, while other units maneuver against the enemy position. These actions take place simultaneously. But, in most current tactical games, opportunity fire is sequential and is typically represented by the Phasing Player moving a unit or stack of units a single hex at a time, giving the non-phasing player an opportunity to fire. Then he moves into the next hex, again giving the non-phasing player an opportunity to fire, etc. Once he has finished moving one unit or stack of units, he selects another and repeats the process until he has moved all of his units. Not only is this very time consuming, but it's often unrealistic as well. First, the phasing player can adjust his move depending on the opportunity fire result. In reality, all these things are happening at the same time. Each player’s units would be moving and firing simultaneously and may not know or see where the enemy maneuvered. In The Last Hundred Yards, simultaneous movement and opportunity fire are modeled primarily through the Action / Reaction Cycle and Fire Mechanics.

Fire Mechanics: Fire mechanics in The Last Hundred Yards are based on the premise that during the short span of a few minutes in a game turn, fire is focused on a specific enemy unit as it fires or maneuvers. To reflect this, DRM markers are used to represent the enemy unit or units under fire and the amount of fire power placed on them. A different color DRM marker is used for each type of fire (green for small arms fire, yellow for anti-tank fire and red for indirect fire). Note that neither player will see the results of his fire until the Fire Resolution Phase occurring after all platoons of the active player have been activated. The following Fire Resolution is extremely fast and simple. The firing player rolls a single sided 10 die for each of his DRM markers in play, adding or subtracting the DRM of this DRM marker to the die roll, then comparing it to the defensive value of the enemy unit. Combat results are Disruptions or Casualty Reductions.

Tank Combat: Tank combat at this scale is the most difficult aspect of modeling small unit combat. In most tactical games, vehicle combat usually has taken the form of defensive fire or motion activity by the targeted vehicle during the “I go” player’s turn. But there are some problems with this approach. First, defensive fire suffers from the “perfect knowledge” problem. The targeted vehicle always spots the menace. Sometimes, even often, the target vehicle has no opportunity to fire at its assailant for the simple reason that the crew of the target vehicle does not know the enemy is there. One cannot see much out of a buttoned-up tank on a battlefield erupting with booming explosions and the life-threatening zip of high velocity shells. The tank that kills yours is often one that was never seen. Second, humans do not possess vision thru 360 degrees. The act of “looking all around” takes time and in that time, a projectile may be on its way to kill your vehicle. Looking right means you are not looking left for a segment of time and in that time segment death may come your way. So in The Last Hundred Yards, the traditional defensive fire concept has been replaced with a reaction sequence that might allow the target vehicle to escape its hunter, and, in some cases, turn the hunted into the hunter.

I played The Last Hundred Yards during the recent GMT Weekend at the Warehouse. I enjoy tactical games and after playing The Last Hundred Yards I can see a place for it on every tactical gamers shelf. It's different enough, with its many innovative mechanics, to give players a new experience into the chaotic world of tactical warfare. I found the ease of combat mechanics refreshing, by not having to add several different stacks of units and totaling up fire power factors, plus the myriad of modifiers which I've seen in many games of this nature. It's simple and straight-forward design makes it a highly approachable game. I wish I'd have had the time to have played again. I hope to see this on the GMT P500 list soon. - Mark Aasted, co-designer of Skies Above the Reich

Simplicity of Rules: The rulebook for The Last Hundred Yards should be less than 20 pages. Any veteran wargamer will appreciate the brevity of the rules and the elegance of the game systems. The designer has created a relatively short set of rules, using simple but innovative solutions to capture the concepts of tactical wargaming well. As a result, The Last Hundred Yards is a fairly simple game to play... although it is challenging to master.