The Dragon and The Cross 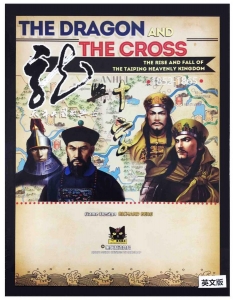 From 1852 to 1865, one of the most massively brutal wars in history was fought in and for China: The Taiping Rebellion, which resulted in over 20 million casualties. It had major religious connections as its leader, Hong Xiu-Quan, believed he was the brother of Jesus Christ. He thus founded The Dynasty.

Eventually many Europeans were drawn into the war, including the famous Charles "Chinese" Gordon.

The DRAGON & THE CROSS game, designed by Richard Berg and produced by Kuro Neko Workshop in Shanghai, includes a huge 40" x 28" game map, over 500 beautiful counters, a deck of play cards with photos and pictures from the years of the rebellion, colorful charts and tables, and a stunning box, all of which provide a wonderfully evocative image of this event for game players.