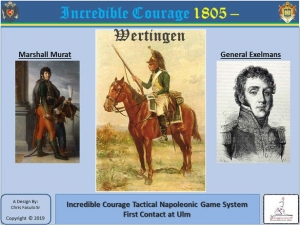 This battle is the First Contact of the Ulm campaign. It set the tone for the entire campaign and gave the French an immense boost of confidence. Napoleon has ordered his Advance Guard, consisting of part of Murat's Reserve Cavalry and Lannes' Vth Corps, to begin the swing around to the south and east of Ulm, in order to cut off Mack from Vienna. Mack, being a bit in the dark about the French maneuvers, sent a force under Baron Auffenberg, to determine where the French were. The Baron's force marched into a very bad situation where his troops, mostly grenadiers, was seriously outnumbered. A member of the French Impaerial Staff, General Kellerman, happened to be forward with the troops. He saw a small group of Austrians in the town of Hohenreichen and ordered the Dragoons he was with the dismount and clear out the Austrians. It was a small affair, but one that showcased the Dragoons ability to fight as infantry. The Dragoons success in pushing out the small Austrian force led to the scenarios that are included in the game. In the end the Austrian force was eliminated as a threat to Napoleons plan to surround and capture Mack's force.

(2) Scenarios that portray the Main Battle starting around noon, and the Austrian movement back to the main position.