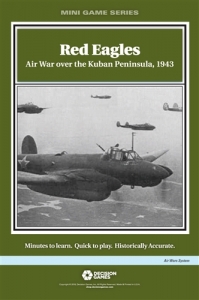 Red Eagles: Air War over the Kuban Peninsula, 1943. The Red Air Force challenged the Luftwaffe in a series of air battles over the Kuban Bridgehead in early 1943. The lessons learned by the Soviet airmen would help them gain air superiority on the Eastern Front later that year.

This is a two player game in the Air Wars series. Units represent one or more Soviet air regiments or German Gruppen. Aircraft include IL-2 Sturmoviks, Lend-Lease P-39s, Bf-109s, He-177s, and more. Bombing missions are needed to take out ground targets, while fighters fly escort or interception missions. The map covers the area from Rostov to Sevastopol.

Each player has a set of cards providing additional capabilities, improved logistics, and special orders from the high command. Victory goes to the player hitting the right targets and protecting friendly assets.