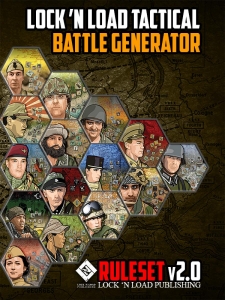 You Design the Battles You Want with Battle Generator v2.0

LnLT Battle Generator v2.0 system is the upgraded version of our Battle Generator v1.0. What we’ve done is to add features that offer some generic systems for building your own battles. This allows Players to mix and match forces from different games and even different eras. Players can have the Viet Cong forces from Heroes of the Nam face off against the German forces from Heroes of Normandy. This requires some thought, but this can make for some very interesting battles.

One of the major changes now is how units can be selected. We now provide two ways for this, the first is our Generic Unit Point System we’ve designed, which can be applied to all games in the series. The second is our Pre-defined Unit Cost Charts. We have also kept the Pre-defined unit cost charts included in the previous Battle Generator. Players can use either the newer Generic Unit Point System or our Pre-defined Point Base Unit Costs. Moving forward, newly released games will include the Pre-defined Point Base Unit Cost Charts with the module rules. The amount of points is defined by the forces in the battle you want to play and then modified up or down by the variables of the battle. This means that you get to the action fast but allow the battle to be very flexible.

This Battle Generator has been tailored to work with all Lock ‘n Load Tactical modules in the series past, present, and future. Players can mutually agree on one or all Battle Generator features they want to use, the choice is all yours.