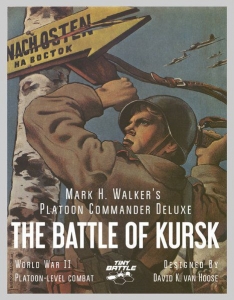 Kursk. Many historians believe it was the turning point of World War II. Kursk. Witness to the largest tank battle of the entire war. Kursk. The end of the myth of German invincibility. Kursk. Just one hell of a lot of fun to game with 1” square cardboard counters representing platoons of infantry and tanks and batteries of anti-tank guns, mortars, and stuff. And that is what you get with Platoon Commander Deluxe: Kursk.

PCD:K uses version 2 of the Platoon Commander rules, which are identical to the V1.5 rules released with the latest Tiny Battle Publishing Platoon Commander game, Poland Strikes, with the exception of enhanced artillery and new air strike routines.