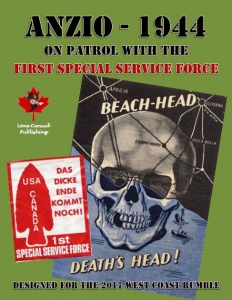 A 7-Scenario Pack dedicated to the members of the American-Canadian First Special Service Force and their actions in the Anzio Beachhead during the early part of 1944. The FSSF remained in combat for 99 days straight without relief, during which it conducted a highly aggressive patrolling strategy that was so effective, the Hermann Göring Division that was in the line across the Mussolini Canal from them, was forced to pull back its front line 1,000 metres and its commander offered a 10-Day furlough to any German who captured one of Die schwarzen Teufel "The Black Devils".

The pack comes with 140x ½" counters of Squads, HS, Crews, SMC, & SW of both the FSSF and the Hermann Göring Division.

Anzio - On Patrol with the First Special Service Force

WCR-1 Gusville: The FSSF was withdrawn from the Winter Line in late January 1944. On 1 February, it landed in the Anzio Beachhead, and that night it put out its first patrols across the Mussolini Canal and deep into German lines

WCR-2 7th Luftwaffe's Attack: The Germans launch a night attack, attempting to bridge the Mussolini Canal; led by members of the 7.Luftwaffeabteilung zur besonderen Verwendung, a unit made up of Luftwaffe personnel serving out their court-martialled sentence on the front line.

WCR-3 Raid at Sussuno: In effort to draw the Germans' attention from the hard-pressed US 45th and 3d Divisions to the west, the FSSF launched a raid against the German position at Sussuno.

WCR-4 Hold at all Cost!: The Germans launch Untemehmen Fischfang (Operation Fish Catch) attempting push the Anglo-American beachhead back into the sea. The attack struck the FSSF position near the split of the Mussolini Canal, was led by the tanks, assault guns, and pioneers of the Hermann Göring Division.

WCR-5 Raid at Cerreto Alto: The BIG scenarios of the module; the FSSF, joined by the tanks of the US 1st Armored Regiment and vehicles of the 81st Reconnaissance Battalion, launch their first daylight raid in the Anzio Beachhead. The raid struck at first light and before the Germans knew what hit them, withdrew, leaving the Germans once more cursing Die Schwarzen Teufel.

WCR-6 Raid on Litoranea: Worried about the growing German defensive strength, the FSSF along with the familiar Sherman tanks of the 1st Armored Regiment launched a series of raids against the Hermann Göring Division positions.

WCR-7 A Primed Situation: With the Germans still in disarray as a result of the FSSF brazen raids, the commanding officer Brigadier-General Frederick, thought the situation primed to pay another visit on their familiar foe, the 7th Luftwaffe Battalion.