Gorbachev: The Fall of Communism (folio) 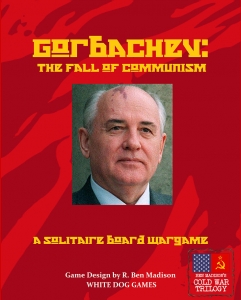 Gorbachev: The Fall of Communism is a solitaire strategy game covering the collapse of the Soviet Union (1985-91), designed by R. Ben Madison.

The game puts you in the role of a trusted and close advisor to Soviet leader Mikhail Gorbachev. You help him manage the stunning changes that rocked the foundations of Communism and the vast Soviet empire during “the decade that shook the world”, when glasnost (candor, free speech) and perestroika (economic and political reform) became household words that defied decades of Cold War certainty.

At the same time, you must manage Gorbachev himself, with his frequent policy shifts, mood swings, and testy relations with allies and foes alike. You will appreciate that much of the chaos you face is Gorbachev’s fault in the first place.

And you’ll even learn two Russian words: “Pravda”, the newspaper, which means ‘Truth’) and “Vremya”, the TV news, which means ‘Time’) – both of which are important features of the game!