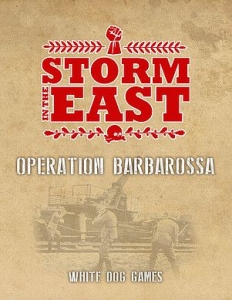 Designed by Steve Pole (War in the Pacific: 1941 - 1945), Storm in the East: Operation Barbarossa is a beer-and-pretzels, two-player game based upon the Axis invasion of Soviet Russia in 1941. One player controls the Axis forces, the other the Soviets. Game components include 254 Counters and Markers, 40 Action Cards, a 22 x 34 inch map printed in one piece, a 16-page Rulebook, a Player Reference Card, and a 4-page Extended Example of Play.

Storm in the East: Operation Barbarossa depicts the largest and most dramatic military campaign in recorded history: the German invasion of Soviet Russia. Germany and its allies had almost five million men deployed in three army groups along the 800 miles of the Soviet border. As dawn broke on 22 June 1941, the first Axis formations crossed into the Soviet Union and smashed through units charged with defending the border. Taken completely by surprise, many were captured or killed while asleep in their barracks. As the dawn bled into a new day, the Luftwaffe bombed airfields in western Russia destroying much of the Soviet air force on the ground, and German bombers attacked cities from Riga in the north to Odessa in the south.

The invasion had achieved a total strategic surprise. At first, Stalin and the Soviet High Command were in a state of denial. It was many hours before they accepted the reality of the situation and started issuing orders allowing local commanders to re-group and mount counterattacks. Their paralysis only added to the chaos and confusion of the Soviet units at the front. It looked as though Hitler’s confident prophesy to his generals was going to be realised: “You have only to kick in the door, and the whole rotten structure will come crashing down.”

But it didn’t. Four months later, the Soviets were still fighting tenaciously and the character of the war had changed. In sight of Moscow, the Axis blitzkrieg had run its course: a war of manoeuvre and mobility had become war of attrition; a bloody slog as autumnal rains heralded rasputitsa and roads became quagmires. The vision of a rapid victory envisaged by Hitler had vanished.

The historical outcome of Operation Barbarossa was the consequence of fateful decisions and extraneous events which conspired to produce a campaign unsurpassed in drama or scale. We hope Storm in the East: Operation Barbarossa does justice to History by presenting players with difficult strategic problems and choices which faced the Axis and Soviet High Commands, and to Reality by demonstrating that the historical result was only one of a number of equally plausible outcomes.