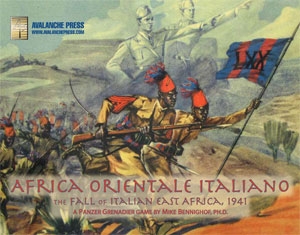 In January 1941, British Empire forces began a two-pronged invasion of Italian East Africa, the fascist-ruled colonies on the Horn of Africa. Britain had known only defeat up until this moment, but after a grueling 11-month campaign the Empire had its first victory.

Africa Orientale Italiana is a complete Panzer Grenadier game based on these battles: the Italian conquest of Somaliland and British re-conquest, the campaign in Eritrea including the bloody Battle of Keren, the invasion of Somaliland and much more. There are 43 scenarios based on these battles, organized into six “battle games” that allow you to play the scenarios in sequence toward your army’s operational goals.