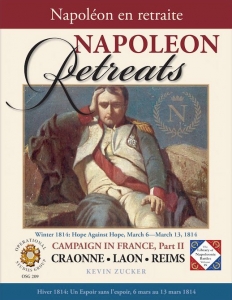 After dispatching Blücher’s Army of Silesia at Vauchamps, Napoleon diverted temporarily toward the Seine at Montereau, for an inconclusive brush with Schwarzenberg’s Army of Bohemia. His inveterate foe Blücher apparently had learned no lessons and threatened to move again on Paris. By March 3rd Napoleon was returning northward along the bank of the Ourcq River. The fall of Soissons, cheaply surrendered by General Moreau, saw the quarry escape over the Aisne River to link-up with 43,000 reinforcements near Laon, raising his strength to over 100,000. While the Emperor concentrated between Fismes and Berry au Bac, Blücher continued to retreat on Laon. Reaching Craonne, the Emperor decided to advance along the chemin des dames to test Blücher’s position on the plateau, and clear the flank of his advance on Laon.

The next game of the TLNB-Series covers the Campaign in France, Part II:

The major battle was Laon, on 9-10 March, when Napoleon, with 37,000, went up against Blücher's position, on the hill of Laon, with 85,000. (Marshal Marmont with a separate VI Corps was supposed to support the attack, but he was dispersed in a night combat.) Blücher wasn't feeling well and failed to pursue. One more battle was to follow (after two days for R&R) and Napoleon won that battle: Reims, against St. Priest. So actually, he won two out of three.

The chemin des dames runs the length of a continuous ridge from the N2 to the N44, the two main highways leading north to Laon. Blücher stationed Sacken and Woronzoff’s infantry on the plateau just west of Craonne. Napoleon decided on a frontal attack up the chemin on what he believed to be no more than a 20,000-man rearguard. The Russians begrudgingly gave ground, gaining it back in a counterattack, and throwing Ney off the Plateau. Once the French Guard cavalry had stabilized the situation, the Russian right flank began to give way under combined pressure of infantry and cavalry. Napoleon directed 88 guns from the Guard artillery to destroy the Russian center and sent the Guard infantry to attack along the chemin to complete the victory. The Russians withdrew in good order.

Marshal Ney advanced on Laon in the morning snow. Bülow with 17,000 men held the suburbs of Semilly and Ardon. On the plain west of Laon, Winzingerode was posted with 25,000 men; east of Laon at Athies, Yorck and Kleist held another 25,000 men; Langeron and Sacken were in reserve with 36,000; Napoleon attacked with fewer than 40,000. As the southern suburbs traded hands, Blücher thought that he was being attacked just by an advanced guard, but Napoleon threw everything into Ney’s attack up until 6 PM. Marmont commanded a separate force of 10,000 which had managed to fight their way to Athies by 5 PM, camping for the night. At 7:30, the Prussian Yorck launched a combined arms attack that routed Marmont’s entire camp. A small group of French Guardsmen managed to halt the pursuit. Marmont lost 45 guns, all his wagons, and 3,500 men. Blücher lost a chance to destroy his foe’s small army.

On March 12th the Russian General St. Priest snatched Reims from its small French garrison. Hearing of this, Napoleon and his small force moved east on the 13th, beginning their attack at 4 PM, quickly driving out the enemy, and cutting communications between Blücher and Schwarzenberg at the same time. Only 10,000 French troops were actually engaged against 15,000 of St. Priest. St. Priest was killed along with 3,000 men while losing 23 guns.

All three maps fit together to create an irregular playing area 44"x68" and covering an entire week of fighting.