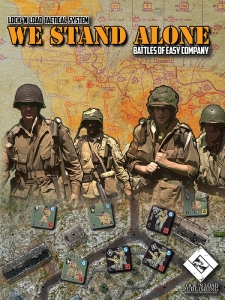 We Stand Alone – Battles of Easy Company is an expansion module for Lock 'n Load Tactical: Heroes of Normandy. Formed in 1942, and after almost two years of rigorous training, Easy Company, 2nd Battalion, 506th Parachute Infantry Regiment, 101st Airborne Division, dropped into Normandy, France, on D-Day, June 6th, 1944. By the end of the war, Easy Company was known as one of the best small units in the European Theater of Operations. The men of Easy Company have been immortalized in the book and mini-series Band of Brothers; now their story is played out in the dynamic medium of the Lock 'n Load Tactical system.

The We Stand Alone expansion module contains 15 scenarios, covering battles from the daring assaults on Brecourt Manor and Carentan, in Normandy, to the desperate defense of Hell's Highway and The Island, during Operation Market Garden, to the frigid foxholes of Bastogne and Noville, during The Battle of the Bulge. The scenarios can be played individually or in three five-scenario campaigns. Thirteen of the 15 scenarios are new designs, with two revised scenarios, plus a Brecourt Manor variant. Three new Maps, including winterized and revised Maps, bring the dramatic landscape of these battles to life: Entrenched German artillery positions in Normandy, an elevated dike and a watchful windmill in Holland, and chilly cratered forests of the Ardennes provide the setting; it's up to you to provide the leadership, heroics, and actions needed to win victory for the brave American paras or the obstinate Germans they faced.

The men of Easy Company were elite soldiers. Whether in the heat of battle or when battling the elements between contact with the enemy, they fought for each other. They fought for victory. And they fought for survival. Join the fight!