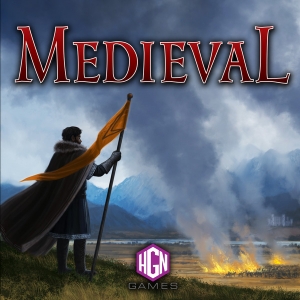 Wage war, unleash the plague, excommunicate the unworthy, and drive back the Mongol hordes.

You are the head of a cabal—bent on controlling provinces, kingdoms, and of the Medieval world through skulduggery and outright conquest.

The object? Spread your influence by controlling regions of Europe, the East, and North Africa—all while driving back the Mongol hordes.

Your turn consists of playing action cards (some mandatory some optional), collecting income and attacking opponents. All with the goal of acquiring more provinces. Provinces provide income for you and are how the game is won. The game ends after the 7th attack by the Mongols (a non-player power that attacks from the East).

This second edition of Medieval features a full-on graphic and component overhaul of the original, mounted map (in lieu of cards), streamlined rules, and new optional rules for games with one, two, and six players.