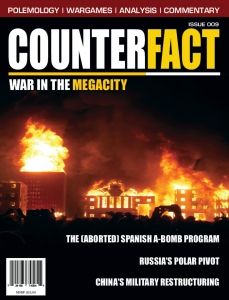 War in the Mega-City by Joseph Miranda

The Coming Pacific War: Predictions from the 1930s & Today By Jim Bloom

War in the MegaCity is a simulation of a fight for a city in the near future. It covers conventional, unconventional and civil disturbance operations. One player controls Government forces, the other the Insurgents.Designed by Joseph Miranda

War in the Megacity (WMC) is a simulation of hypothetical near-future battles fought in metropolitan areas with populations of 10 million or more. The objective is to show the spectrum of operations--conventional, special operations and unconventional--in this type of fighting on the grand tactical level. There are two sides, both controlled by one player, in WMC: the Insurgent player, who wants to seize control of the city. Opposing him in that effort is the Government player. The Infowar Index is central to play. Each player has an Infowar Index, which indicates how successful his is in achieving his goals--representing the amount of overall public support each side is getting.

Each game turn represents from two days to two weeks of real time, depending on the tempo and scope of the activities conducted in each one. The various units represent force sizes--most either task-organized or spontaneously generated--varying between battalion and brigade sizes: anywhere from about 500 to 5,000 total personnel.

The Game Map shows a megacity and its environs. The large rectangular boxes are called sectors. Each sector is named after the predominant structure within it or the main activity conducted across it. Players organize and move their units within the sector boxes.