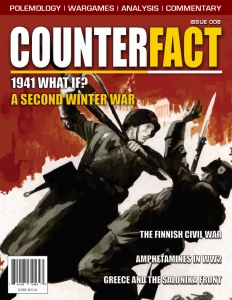 Amphetamine Use in World War II by Jon Cecil

100 Years Ago: Greece & The Salonika Front in World War I by Raymond Bell

A Squadron Born in War by Steven K. Dixon

1941: What If? An Alternative History Wargame of a Second Winter War by Ty Bomba

1941: What If? An Alternative History Wargame of a Second Winter War is a low-to-intermediate complexity two-player alternative history wargame that's also easily adaptable to solitaire play. It allows you to investigate the parameters inherent in the situation in Central Eastern Europe, at the end of 1940, had the Bulgarians decided to ally with the Soviets instead of the Germans, which historically they considered doing. The result would’ve been the Second War's eastern front erupting half a year prior to its historic start date under both natural and man-made conditions vastly different than pertained at that later date.

Each hex represents 45 miles (73 km) from side to opposite side. Each turn represents a half a month of real time. Each unit of maneuver represents an army or corps or ad hoc equivalent of those sizes of units.