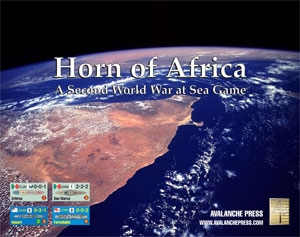 Thousands of miles from the major theaters of World War II, small British and Italian squadrons struggled to control the entrance to the Red Sea. Cut off from their bases in Europe, the Italian Red Sea Flotilla did its best to close off this vital route leading from India and Australia to the Suez Canal.

Horn of Africa takes players to this little-known theatre of the Second World War, the battles between the Royal Navy’s Red Sea Force and the Regia Marina’s Red Sea Flotilla during the East African Campaign of 1940-1941. Ten battle and 15 operational scenarios depict the major actions of the campaign, along with a number of hypothetical situations that examine possible British intervention in the Second Italo-Abyssinian War of 1935-1936, as well as the use of ships on both sides not historically available but which with better preparation in the 1930’s or even on the eve of war could have been present.

Horn of Africa is a complete boxed game in the Second World War at Sea series. There are 40 “long” ship pieces and 60 square pieces representing small warships, transports, aircraft and markers needed for play. These include the complete Red Sea Flotilla and Red Sea Force, plus some unusual ships planned but never built (or never re-built) by both the Royal Navy and the Regia Marina.

The operational map depicts the Red Sea and Gulf of Aden, including all the major ports and airbases (such as they were) of 1940-42. The tactical map is a generic blue field of hexagons, used to resolve surface combat. There, ships maneuver and fight using their gunnery and torpedo factors. Each player rolls a number of dice according to the ship’s capabilities, hitting on a result of 6. Gunnery and torpedo damage tables give the results: Ships can suffer damage to engines, hull or armament. Air attacks are resolved in similar fashion. The combat systems yield results rapidly but in a historically accurate fashion, giving a good balance of fun and insight.