Stalingrad: Verdun on the Volga 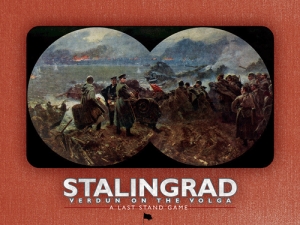 It might be the single bloodiest battle in history. It was most certainly the most strategically decisive battle of WW2. After Stalingrad, it was only a matter of time for Hitler's Germany. But if the Wehrmacht had won there, who can say what the outcome might have been?

Now, Last Stand Games is making its debut release with a situation every gamer knows, and a game engine most gamers have experienced...but both offered in a totally new approach. Stalingrad: Verdun on the Volga demonstrates that Michael Rinella has continued to learn and adapt, as Stalingrad: Verdun on the Volga offers a clean, streamlined version of the classic area-impulse system, the most recent example of which is his own Operation Battleaxe.

With a setup time of less than 15 minutes, but a huge mounted, double map-board, players will have plenty of chances to try new approaches and come back for more. Three very different scenario situations give players the option to go for a game that might be complete in 3-4 hours or one that will probably take 8 hours, although there are VP checks along the way that could shorten things suddenly.

What is interesting is that the game gives players "more" of the Stalingrad situation than they are used to, while reducing complexity as much as possible. There are only a few different "unit types" that affect play, and there is no 'spending' of movement points from space to space in the traditional way, but an audacious (and lucky) attacker can move again and again.

The battlefield area depicted includes zones to both the north and south of the city, which not only increases available options but also set up situations where both players must look to attack and defend, from an early point in the game.

But while the mechanics are streamlined, the game functions at a high level, offering a very different and more realistic modeling of German combat attrition and a much more accurate Soviet order of battle, based on most recent publications of post-Cold War Soviet sources.

The game is "friendly to novices" in getting started, but offers grognards all the challenges they desire, with the focus on managing options and tactical swings of fortune, versus plowing through a big rulebook. Each turn forces players to interact and modify plans, as they balance the advantages of careful set-up versus a turn that can suddenly end, leaving the attack either not-made or hanging. Lots of tension and play balance is excellent. Both sides can win and win with excitement. Surprisingly interesting solitaire as well.

There is a five-turn "basic" game or "tournament" game. This is the most mobile, decision-filled, and fastest playing choice for players. The designer considers it the core game and the one most everyone will play, most of the time.

Last is a very historical option that simply mandates the Germans capture all the areas along the river, where players may agree to play through to an automatic German victory or the end of Turn 15, with no consider- ation of victory points.

Stalingrad: Verdun on the Volga Components: