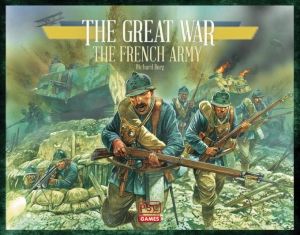 The French Army Expansion is the second expansion for The Great War and it focuses on battles involving the French Army.

When Germany declared war on Russia on 1 August 1914, France honoured her treaty with Russia and mobilized to meet an expected German offensive. Germany, as anticipated, marched through Belgium and the rest is history. Although the French Army fought in many battles, the scenarios in this expansion focus on their most famous campaign – Verdun. The Battle of Verdun lasted from February to December 1916, and is a testament to the strength and fortitude of the French armed forces.

The French Army expansion presents 12 scenarios from this famous battle. The box includes a rule and scenario book, 2 special personnel and terrain summary sheets, 3 punchboards of double-sided terrain tiles, tokens and markers, and a complete French force of plastic poilus.