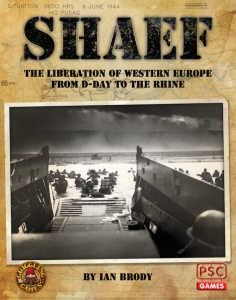 One player takes the role of SHAEF – Supreme Headquarters Allied Expeditionary Force commanded by US General Dwight D. Eisenhower. The Allied player’s goal is to control at least two of four key locations in Germany before the end of March 1945. The Axis player seeks to frustrate these plans, but can win an instant victory if he can repel the Overlord invasion.

The historical armies and corps that fought in the campaign are represented by stand-up counters moving on the map. Smaller forces, plus combat support and special tactics, are handled by beautiful cards.