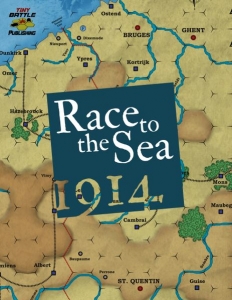 Another brilliant Herman Luttmann design! As you probably guessed from the title, Race to the Sea takes place in the early days of World War I. Player's control corps-sized units in the Allied and German armies in Western Europe as they attempt to out-maneuver their enemies in a last-ditch effort to win the war and be home by Christmas. Hermann’s dynamic and unique rules set features a diceless, card-based combat system (originally introduced in Dead Reckoning) that oozes narrative and tension with quick resolution and gameplay. The result is an exciting simulation of the last mobile campaign on the western front fought in World War I.

a ziploc bag to store it in.