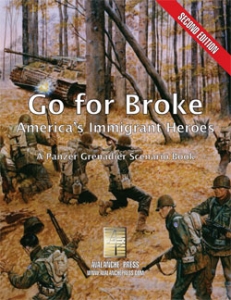 In February 1942, President Franklin D. Roosevelt issued the first of a series of executive orders that would send over 100,000 American citizens to concentration camps. One year later, a Japanese-American regiment began to form. The 442nd Regimental Combat Team, eventually also including the 100th Infantry Battalion formed in Hawai'i, racked up more decorations than any regiment in American military history: 18,143 awards for battlefield valor, including 21 Medals of Honor.

Go for Broke is a book supplement for the Panzer Grenadier series, with 29 new scenarios by Mike Perryman depicting the actions of America's toughest fighters in the last years of the Second World War. There are also two “battle games” from developers Matt Ward and Daniel Rouleau that link the scenarios together so players can pursue operational goals, a brief tie-breaker “battle game,” and two solitaire “Medal of Honor” battle games, a new concept for Panzer Grenadier.

There are also 77 new die-cut and mounted playing pieces depicting this regiment in its own color scheme.

Go for Broke is not a complete product: ownership of Invasion 1944, Elsenborn Ridgeand Liberation 1944 is required to enjoy all of the scenario