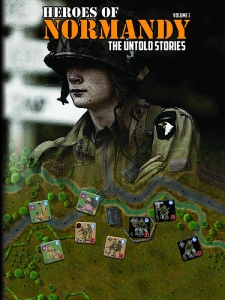 Heroes of Normandy – The Untold Stories Vol. 1 is an expansion module for Heroes of Normandy. It contains eight new scenarios, plus a bonus scenario in which two scenarios are combined to form a larger one. The idea for this expansion started from a long desire to tell these stories as well as enjoying hearing them. One of the many wonderful things with books, comics and of course games is sharing the fun together. Many hours of storytelling can start off with “Do you remember, or I can’t believe this happened.” It is clear to us we weren’t the only ones who enjoy hearing these stories. We wanted our stories to be told with characters you know and enjoy playing our games but at the same time if you never played one of our games you would still enjoy reading these stories. So, a number of the story elements are taken from our Lock ’n Load Tactical game series, specifically the names of leaders, heroes, units, and the occasional moments inspired by our own gameplay. By doing this it has added a new level to our stories and added the ability and similarity for these men and their stories to live on not just in our games but also in our stories and hearts.

The scenarios do not have to be played in order and are presented here in the same order in which they appear in the book. Most of them can be played in 45 minutes or fewer, and the replay value is high. It was also nice to get the little-used British commando units into some more scenarios. Three new 4K X-Maps are included that depict the lush Norman countryside, presenting winding streams, tree-lined farms, and a quaint village. Vital bridges need to be destroyed, important villages need to be controlled, daring rescues need to be made and vengeance must be doled out no matter the cost. Heroics, leadership and, as always, luck can mean the difference between victory and defeat. Now you can read or listen to the stories and then play them out on your gaming table!