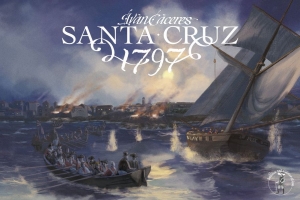 A small card driven block game about the night battle of Santa Cruz de Tenerife in 1797.

The game pitches the British player, with superior numbers and quality, against the Spanish defenders that try to contain the British landings and avoid losing the main fortifications and vital points in the city.

The game is tense, with a lot of interaction that depicts British naval movement, Spanish coastal batteries fire and plenty of action in a confuse, see-saw night street fighting.