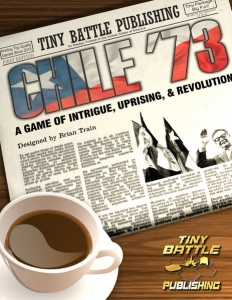 "Before the military coup in Chile, we had the idea that military coups happen in Banana Republics, somewhere in Central America. It would never happen in Chile. Chile was such a solid democracy. And when it happened, it had brutal characteristics." - Isabel Allende

Coup d'etats are a messy business. Far from carefully orchestrated military precision, when various factions of a populace overthrow a government (especially when they did so before the age of internet), operations are strung together in secrecy, with limited communication between even likeminded factions. Veteran game designer Brian Train's brand new thriller of a game, Chile '73, brings the secrecy, the suspense, and then the all-out battle of the coup to your game table. In the first portion of the game, two to four players plot secretly to carry out their own plans to gain or maintain rule of Chile, plotting and scrambling to position their forces to best advantage. Once the coup begins, the entire game shifts to open warfare. Loyalties are revealed, and players battle to the finish.

Civilian and paramilitary units face off against military ground forces, aided by tactical air units and transport aircraft. Do you have what it takes to elevate your cause to supremacy?