World at War 61: Peaks of the Caucasus 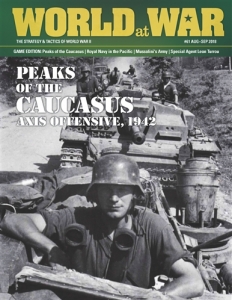 Peaks of the Caucasus simulates the German offensive in the southern Soviet Union in 1942, and the ensuing Soviet Counteroffensive. The German objective was initially the Caucasus oilfields, but the campaign turned into a struggle for the city of Stalingrad on the Volga. The game uses a variant of the “Boots system” to model higher echelon command-control and logistics, and their impact on the theater of operations. The map is divided into two sectors: Stalingrad and the Caucasus. Various Command markers will activate a player's forces on one or the other (and sometimes both) Fronts. Effectively, the player is in command of theater forces and must operate within historically based high command interference in operations.

Each game turn represents one month of operations. Each hex is about 100 kilometers across. Most ground units represent two to six divisions. The game scenarios start in July after the first phase of the German Fall Blau (Plan Blue) offensive, which commenced on 28 June 1942, at the point where Army Group South was divided into Army Groups A and B.