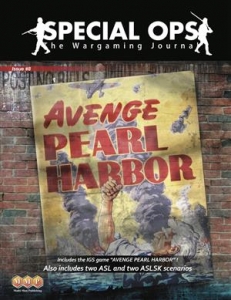 Avenge Pearl Harbor was originally published in Game Journal #60 as Storm Over the Japanese Homeland and allows players to simulate Operation DOWNFALL, the hypothetical invasion of Japan in November 1945. The game uses the same basic system as What Price Glory? Operational cards are used on both attack and defense. Game components include one 22" x 34" map, 200 counters, and 32 cards.