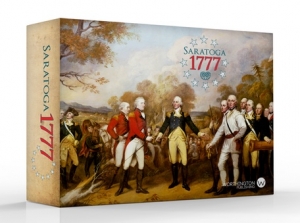 Saratoga 1777 is a war game about the American Revolutionary War campaign led by British General Burgoyne against the American colonist led by General Gates. It is a point to point movement war game using blocks with labels for the military units. The game uses the system from our previous games, New York 1776 and Trenton 1776.

The game has some excellent historical “chrome” mixed in with units for General Benedict Arnold (not only a leader but also rolls 4 dice in combat and is always active), the American Elite units of Warner, Dearborn, and Daniel Morgan with devastating firepower, using the river/lakes and river/lake roads to move more units, the Native American ability to hit and run, and British General Clinton’s approach from New York City toward Albany drawing off American forces.