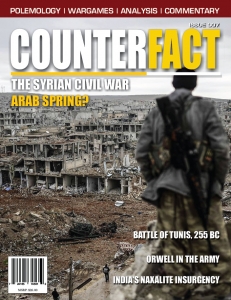 The Battle of Tunis, 255 BC: Rome's North African Disaster By Arnold Blumberg

Orwell in the Army: The Military Career of Eric Blair by Brian Train

Islamic State: War in Syria (ISWS) is a two-player wargame simulating the post-Russian intervention phase of the Syrian Civil War.

In this game, there are two coalitions fighting parallel wars against a common foe: DAESH and Al Qaeda in Syria, with one player (the US player) commanding US/NATO Forces, Kurdish/SDF and non-Islamic Syrian Rebels, and a second player (the Russian player) controlling the Syrian Arab Army (SAA, Assad’s forces) and their allies (Iran/Hezbollah, Russia).

DAESH and Al-Qaeda in Syria are controlled by the game system, although certain game events allow players to use these forces against each other.

"DAESH" is the English-language acronym for the Arabic phrase (also presented here in Anglicized form): al-Dawla al-Islamiya al-Iraq al-Sham, and meaning "The Islamic State of Iraq and the Levant."

Each game turn represents about from two to six weeks. The units of maneuver are regiments, brigades, divisions or equivalents.

Islamic State: Syria War is a systemic evolution of IS: Libya. The changes in the game system reflect the fact that the later simulated an all-out proxy and civil war, while the later simulates an intervention/pacification campaign by NATO in Northern Africa, away from Russian or Iranian meddling.

In this game, both powers contemplate the pacification and stabilization of Syria, even though the war is being fought simultaneously in Syria and Iraq, and, in fact, the wars in these two countries feed each other. Neither the Russians nor the USA or the UE are considering the partition of Syria and Iraq along religious and ethnic lines (into Kurdish, Shia and Sunni entities). It is also assumed that the USA and Russia have reached an agreement to share intelligence in the fight against a common enemy: DAESH. The size and time constraints forced to simplify the myriad combatant factions into "Islamist Rebels" and "Non-Islamist Rebels," although the later might include supposedly "moderate" Islamist rebels.