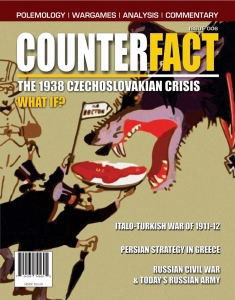 1938: What If? is a low-intermediate complexity two-player alternative history wargame. It investigates the parameters of the first month of the conflict that likely would've resulted had the Czechoslovakians refused to accept the Munich agreement. Had they been willing to fight, the Soviets were pledged to come to their aid as fully and directly as possible. That intervention would've immediately escalated the crisis beyond a Czech-German one and into the realm of (at least) a major regional war across Central-Eastern Europe. That war, in turn, would've cast Poland as at least a co-belligerent of Germany, since the Warsaw government insisted it would defend its nation's territorial integrity against all comers, and the only practical route for a large-scale Red Army advance toward Czechoslovakia ran through Poland. At the same time, the Poles and Czechoslovakians had territorial and political grievances against each other going back to 1919, while Hungary similarly coveted the latter's province of Slovakia.

Of course, the Germans didn't know all that at time. In that regard, then, the three ad hoc corps-sized groupings (Grenzkommandos) they set up along their western border to deal with any potential Anglo-French intervention have been deducted from their on-map order of battle, just as they would've been in the real event.

The game only covers the hypothetical war's first month of October. That's because all sources are agreed none of the participants had the logistical wherewithal at the time to go on fighting longer than that without a pause to resupply.

Each hex represents 20 miles (32.5 km) from side to opposite side. Each turn represents half a week during October 1938. Each unit of maneuver represents an army, corps or division.