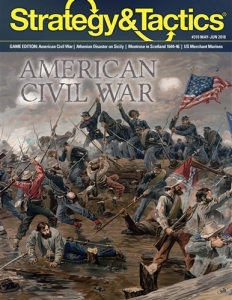 The American Civil War was by far the most destructive conflict in US history. This game gives players a chance to change the outcome. The Confederate player must maintain a viable economic and political core, while the Union player attempts to divide and conquer the southern states. Victory is checked every turn: Union progress can have political consequences or possibly end the game if either player fails to achieve expectations.

During each quarterly turns, players recruit additional forces, then conduct a pair of impulses. During each impulse, each player moves forces and fight battles. Movement rates are high, but enemy forces can react by retreating, blocking further movement, or counterattacking. Battles are decided by a combination of good leaders and relative strength. The Confederacy starts with a decided advantage in leadership. Union leaders appear only after fighting battles: the Union player may have to lose a few battles to get the leaders needed to win the war.