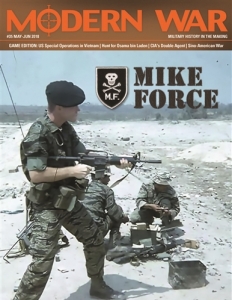 Mike Force is a solitaire wargame covering US Special Forces Operations in South Vietnam’s I Corps and adjoining areas of Laos during the Vietnam War. In Mike Force, you play the Free World forces (US, ARVN, Laotian) while the game system controls the Communists (NVA, VC). Communist mobile forces will advance towards critical Free World bases and cities, and if they take them, can win the game. You as the Free World player must use a combination of defensive operations to delay the Communists while your offensive forces hit them in their bases, represented by static units. By so doing, you can turn the tide in I Corps—and since this is a critical nexus for the Ho Chi Minh Trail, the entire War in Vietnam.