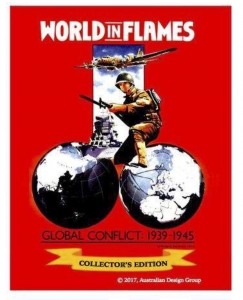 It is the dawn of September 1939, and the dark clouds of war hover over the globe. China and Japan have already been fighting for more than 2 years and now a Continental war is about to spread worldwide, a World in Flames.

You, as leader of your nation, must guide your country through its darkest days, enhancing your economy, working with allies, building the units you need and then employing them effectively to defeat your manifold foes.

World in Flames shows the entire world. and is itself the world's biggest boardgame.

In 1985 Australian Design Group launched what would become the definitive international award winning game of World War II, World in Flames. Now after 32 years we are giving you the greatest strategy game ever.

From the snowy wastes of the arctic to the deserts of Africa and the Jungles of the Pacific; armies, navies and air flotillas contest the air sea and sky to liberate subject peoples from their wicked overlords.

On any one day you might be fighting on the shores of Normandy, defending your capital, struggling amongst the snows of Russia, or launching carrier strikes in a life-or-death struggle for control of your sea lanes.

But battle is just one demand on your skills. You must also plan for your future. World in Flames allows you to produce everything you did historically or to change your mix depending on your cunning long-term plans to defeat your foes.

Do you need fleets or armies and if so what kind of fleets and what sort of armies? Carriers to dominate the seas, cruisers for scouting or submarines to become your silent killers, As for armies, do you need a small elite army or a large militia to hold what you can until your allies intervene, and the fortunes of war swing crushingly in your favour.

Speaking of allies, you need to flatter your potential partners, plan with your allies

and negotiate with your potential enemies

to ensure that when the blow comes it will be you dictating the terms and not your foes.

But Allies is a purely relative term, and only one country can emerge from this epic struggle truly strong and free. Is this to be your century?

Based on thousands of hours of research, plans and top secret technical data and input from over 10 million hours of playtest data, World in Flames is the definitive strategic game of World War II.

With 5 hard-mounted maps and 1600 counters, World in Flames Collector's Edition Classic game is the ultimate boardgame, with unlimited fun, strategy and replayability. The incredible depth of detail in terrain and units, from the most common, to the most exotic, has never been paralleled.

World in Flames is the ultimate gaming challenge. Are you game to play?

The World in Flames Collector’s Edition Classic game consists of the:

Everything you need to play the game.

The World in Flames Rules set consists of:

The Campaign & Players’ Guide (sections 24-30 of the rules including scenario and campaign set ups); and

The World in Flames Map set consists of: