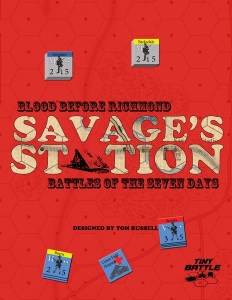 Blood Before Richmond is a series of games recreating some of the Seven Days Battles fought between George B. McClellan's Army of the Potomac and the Confederate Army of Northern Virginia, under its daring new commander, Robert E. Lee. McClellan squandered a numerical advantage by demonstrating what would become a characteristic knack for turning tactical victories into strategic failures.Lee's ambitious battle plans were hindered by subordinates who seemed incapable of carrying them out - chief among them, oddly, the usually exemplary Stonewall Jackson. If either side had been up to snuff, the war might have been decided in Late June 1862. Tiny Battle Publishing is proud to present this series of quick-playing, medium-complexity games about these fascinating and overlooked battles of the American Civil War.

The story of the Seven Days is the story of bizarrely incompetent leaders and badly-timed attacks, but Savage's Station really takes the cake. The usually wily Rebel general "Prince John" Magruder is charged with leading an attack on the lightly-defended Union rear, to be supported by three divisions under Stonewall Jackson. Jackson got confused and never showed (surprise-surprise),and Magruder, stoned out of his gourd on morphine, dragged his feel all day before finally launching a half-hearted assault after 5PM, which was ended by a sudden thunderstorm.

This is the smallest of the games in the Blood Before Richmond series, and it's all about evaluating risk and pressing your luck. The Confederate Player can bring in extra units, such as the Land Merrimack (a rail mounted naval gun) but at the cost of precious VP. Will he have enough time to make up the difference, or will the game be called on account of rain?

A modified 2d6 die roll determines which Confederate Divisions activate on a given turn. Divisions that didn't pull their weight historically are less likely to show up than those that did most of the fighting. It's a simple, clever, and elegant way to recreate the difficulties Lee had during the Seven Days.

Flipping a counter over when you take a hit doesn't capture the feel of bloody infantry collisions or the horrifying impact of artillery fire. The unique "stack of steps" system uses Step Counters stacked beneath the ID Counter to account for brutal attrition and devastating wipe-outs.

88 counters at the brigade level

A spiffy Ziploc bag to store your stack of steps