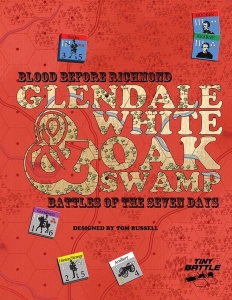 Blood Before Richmond is a series of games recreating some of the Seven Days Battles fought between George B. McClellan’s Army of the Potomac and the Confederate Army of Northern Virginia, under its daring new commander, Robert E. Lee. McClellan squandered a numerical advantage by demonstrating what would become a characteristic knack for turning tactical victories into strategic failures. Lee’s ambitious battle plans were hindered by subordinates who seemed incapable of carrying them out - chief among them, oddly, the usually exemplary Stonewall Jackson. If either side had been up to snuff, the war might have been decided in Late June 1862. Tiny Battle Publishing is proud to present this series of quick-playing, medium-complexity games about these fascinating and overlooked battles of the American Civil War.

The Union host is heading for Malvern Hill, a superior defensive position that will allow them to escape destruction and encirclement. If Lee wants to achieve those aims, he needs to cut off that retreat at a place called Glendale, which requires the careful coordination of his generals. But, par for the course, only A.P. Hill and Longstreet seem capable of doing what they’re told: Ben Huger and his men are too busy moonlighting as lumberjacks, while Stonewall Jackson fights a pointless artillery duel at White Oak Swamp - when he’s not napping, anyway. Difficult terrain and fresh, high-quality Union brigades mean that the weary Confederates have their work cut out for them. The optional Galena Rule gives the Union command-control problems of their own to contend with.

176 counters at the brigade level, with optional Union Leader counters

Take a scenic stroll through the densely-wooded 11x17 inch map

A spiffy Ziploc bag to store your stack of steps