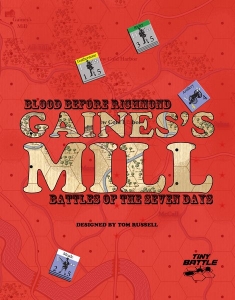 Blood Before Richmond is a series of games recreating some of the Seven Days Battles fought between George B. McClellan’s Army of the Potomac and the Confederate Army of Northern Virginia, under its daring new commander, Robert E. Lee. McClellan squandered a numerical advantage by demonstrating what would become a characteristic knack for turning tactical victories into strategic failures. Lee’s ambitious battle plans were hindered by subordinates who seemed incapable of carrying them out - chief among them, oddly, the usually exemplary Stonewall Jackson. If either side had been up to snuff, the war might have been decided in Late June 1861. Tiny Battle Publishing is proud to present this series of quick-playing, medium-complexity games about these fascinating and overlooked battles of the American Civil War, starting with Gaines's Mill.

Our first game in the series focuses on the only Confederate victory of the Seven Days. Despite the atypical outcome, it ticks off all the boxes on your Seven Days Bingo Card (just like the dice, it’s not included). Lee’s ambitious battle plan was abandoned late in the day for piecemeal frontal assaults on well-entrenched Union defensive positions. Jackson twiddled his thumbs for most of the battle, only appearing when Lee met with him personally to coordinate a final all-out assault. This managed to break the Union line, which might have held had the paranoid McClellan not held back vital reinforcements until the last possible moment.

176 counters at the brigade level, with way too many Andersons .

A spiffy Ziploc bag to store your stack of steps.