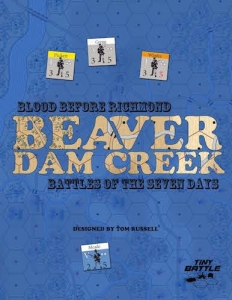 Blood Before Richmond is a series of games recreating some of the Seven Days Battles fought between George B. McClellan’s Army of the Potomac and the Confederate Army of Northern Virginia, under its daring new commander, Robert E. Lee. McClellan squandered a numerical advantage by demonstrating what would become a characteristic knack for turning tactical victories into strategic failures. Lee’s ambitious battle plans were hindered by subordinates who seemed incapable of carrying them out - chief among them, oddly, the usually exemplary Stonewall Jackson. If either side had been up to snuff, the war might have been decided in Late June 1861. Tiny Battle Publishing is proud to present this series of quick-playing, medium-complexity games about these fascinating and overlooked battles of the American Civil War, starting with Gaines's Mill.

The first major engagement of the Seven Days set the precedent for the fighting that would follow. You have a small contingent of Union soldiers occupying a strong defensive position; Lee's plan calls for multiple divisions to coordinate their assaults so as to outflank and destroy the enemy; one or two divisions do all the fighting, abandoning the plan and settling for costly frontal assaults. At least this time, Stonewall Jackson shows up - sort of, anyway: having just marched from the Valley with orders to attack the Union rear, he hears the fighting and promptly sets up camp instead, because of course he does.

The fourth game in our series goes back to the beginning. Though this battle has relatively few special rules, it's very challenging. It's much harder for the johnnies to activate more than a single division at a time, while the yankees find their line stretched precariously thin...

A modified 2d6 die roll determines which Confederate Divisions activate on a given turn. Divisions that didn’t pull their weight historically are less likely to show up than those that did most of the fighting. It’s a simple, clever, and elegant way to recreate the difficulties Lee had during the Seven Days, and it creates the frustrating and tantalizing possibility that Jackson could do something if he’d only show up.

Flipping a counter over when you take a hit doesn’t capture the feel of bloody infantry collisions or the horrifying impact of artillery fire. The unique “stack of steps” system uses Step Counters stacked beneath the ID Counter to account for brutal attrition and devastating wipe-outs

A spiffy Ziploc bag to store your stack of steps.

You'll need to requisition a couple of six-sided dice from the quartermaster.