Accueil > Wargames > Tiny Battle Publishing > Our Royal Bones: The Battle of The Bouvines

Our Royal Bones: The Battle of The Bouvines 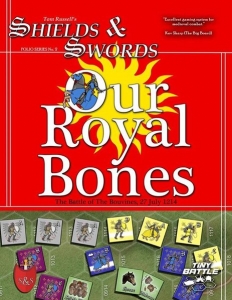 Outnumbered by an Anglo-German-Flemish Coalition, France's King Phillip II Augustus gave battle at a plain near Bouvines that was ideal for his superior cavalry. The result was a humiliating defeat for the coalition that led to the overthrow of the Holy Roman Emperor and the signing of the Magna Carta. You'd be hard-pressed to find a medieval battle that was more decisive, or more far-reaching in its consequences.

But it's not only interesting and important from a historical point of view; it also makes for an exciting game. Our Royal Bones uses the core Shields & Swords system to highlight differences in organizational structure and command control, and adds rules for captured nobles and elite heavy cavalry units. The French have a weak flank that must be protected at all costs, and the Coalition has a mass of powerful infantry units in the center. There are plenty of tactical choices to be made, and one strategic decision on which the whole battle might turn. When the French Player declares Initiative for the first time, he brings his powerful cavalry reserve into play-- as well as his opponent's. Play it too soon, and their German counterparts might turn that vital flank. But you also don't want them showing up late to the party. When to deploy one's reserve is an historically tricky business, and here it will be largely dependent on the situation that's developed over the course of each game. Open terrain and varied Unit Types allow for greater experimentation and replayability while presenting a game that's historically accurate within the broad parameters of the core system.

* A coalition of 88 colorful counters