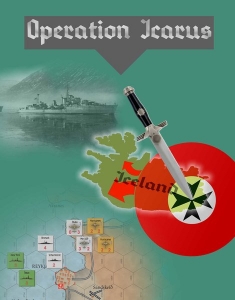 On May 9, 1940, Great Britain issued a message to the leadership of Iceland, offering military defense of the island kingdom in exchange for permission for British troops to establish a base there, expelling existing German diplomats and forces, and preventing a German invasion of Britain from the north.

The Icelandic government declined, stating its neutrality. The following day, the British invaded without resistance at Reykjavik, and the rest is history. But what if German invasion forces had beaten the British to Iceland? Or had landed simultaneously or shortly after?

The Germans named their unrealized plan to invade Iceland “Unternehmen Ikarus”, Operation Icarus. Tiny Battle Publishing’s thrilling game of the same name revives this tenuous turning point in World War II, where British troops stood between Germany and the rest of the world, on 40,000 square miles of icy rock in the North Atlantic.

Iceland, a bleak, sparsely populated island of about 200,000 people, sat astride the northernmost maritime route between North America and Great Britain. From Icelandic bases, the Germans would have had a good shot at seriously disrupting maritime commerce along the North Atlantic. That having been said, the Germans would have been going against a far more powerful naval force than their own, and would have had to rely heavily on stealth and luck to pull off such an invasion.

The conventional side of the equation was comprised of the German 163rd Infantry Division, supported by some light armor, a few extra guns, a few Luftwaffe reconnaissance aircraft with the range to make it, plus whatever bases they or their infiltrators might have been able to secure.

Opposing them were the British, licking their wounds from Norway but still the most powerful naval force in the Atlantic. They would have put up a desperate fight rather than allow their sea lanes to be horrendously impacted. For a number of reasons the two key objectives likely to be chosen by both sides were Reykjavik and Akureyri, hence the emphasis on these areas in the game.

Operation Icarus is a brigade-level tactical wargame featuring land, sea, and air units navigating Iceland, the ocean and sea surrounding it, and the skies above.

One Ziploc Bag to Keep Contents Safe from Rogue Fjörulalli