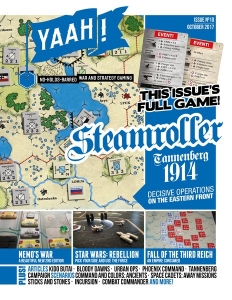 As the days grow shorter, you're gonna need something to fill up all that extra time indoors - and this 78-page issue's game looks like a great place to start. Hermann Luttmann's Steamroller is a highly playable (and when we say 'highly playable" we mean "fun as hell"), tense, operational look at 1914's pivotal Tannenberg campaign. Command either the German 8th Army or the Russian 1st and 2nd Armies in the battle that decided the early course of the Great War on the Eastern Front. The game is the latest iteration of the system used in Hermann's earlier Race to the Sea 1914, (as well as Dead Reckoning) with corps, divisions, and brigades traipsing around the wilderlands of East Prussia and northeastern Poland.

If you "read it for the articles", we've got you covered. Nick O'Neill visits a galaxy far, far away with his take on popular Star Wars: Rebellion, while Deborah Malmud dives deep into VPG's gorgeous new 2nd edition of Nemo's War. Roger Leroux gets up close with Urban Ops, newcomer Keith Beason scrutinizes The Fall of the Third Reich, and John Burtt takes a look at Bloody Dawns. Brad Smith shows the true grit of some gamers playing a convention game of the hyper-complex oldie Phoenix Command, and Col. Smitty provides some context for this issue's game with a historical overview of the Tannenberg campaign.

It's not Yaah! without the scenarios, right? We've got the second part of Chuck Turnista's fascinating King Arthur scenarios for Command and Colors: Ancients, an exclusive setup for Space Cadets: Away Missions by Tom Russell, a Sticks and Stones scenario pulled from Mark H. Walker's Dark War: Retribution from the designer himself, and a desperate alliance of bitter enemies for Grindhouse Games' Incursion.