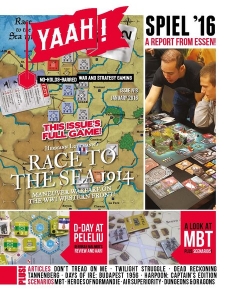 It’s our eighth issue and Brad Smith is at the helm of the magazine as a guest-editor. We’ve got 88 pages crammed full of gaming goodness from a diverse group of talented writers. You’ll find news on the latest wargaming releases, a look back at some classic wargames, scenarios, expansions, and of course, our featured game.

To start off, our feature story is an exclusive tour of Essen by the one and only Ania B. Ziolkowska. Take a tour of Spiel ’16 boardgaming convention to discover not only the up and coming hits but also the hidden gems of the boardgaming world. We’ve dedicated 13 pages to coverage of Essen in this issue. Ania takes you through a guided journey through the halls of Messe Essen, where the world comes to show off and play boardgames. She offers her impressions of various new and interesting games after giving them a test run. She also lends a unique wargamer’s perspective on the experience and value of attending the Spiel convention. This article alone makes this issue worth the price of admission.

We also have a fantastic new featured game by Hermann Luttman, Race to the Sea 1914. As you probably guessed from the title, the game takes place in the early days of World War I. The Allied and German armies in Western Europe attempt to out-maneuver their forces in a last-ditch effort to win the war and be home by Christmas. Hermann’s dynamic and unique rules set features a diceless, card-based combat system that oozes narrative and tension with quick resolution and gameplay. The result is an exciting simulation of the last mobile campaign on the western front fought in World War I.

Norm Lunde takes a look at the recent release of the newly redesigned and refurbished MBT from GMT. James Day’s much-loved Panzer system sets its sights on armored warfare in West Germany between the Americans and Soviets in a hypothetical WW3 scenario set in 1987. Norm shows off the components and talks about how the game plays. If you’ve been curious about MBT since its much-anticipated update was released earlier in 2016, you’ll find this article interesting and insightful.

Other stories in our Games We Love section are excellent too. Roger Leroux gives his personal take on his favorite game, Twilight Struggle. This is the first part of his examination of the game and the second part will be featured in an upcoming issue. Fred Manzo tells us how to deal with the oncoming zombie hordes with an in-depth look at strategies for both sides in his article on Dead Reckoning. Brad Smith talks about wargaming with kids and shows off the one particular classic he’s hoping to haul out on the table. Harpoon: Captain’s Edition is a perfect starter game for people with children and he’s here to tell us why.

The writing talents of Deborah Malmud also need to be mentioned here. In this issue, she brings her keen insight to bear on two games, Don’t Tread on Me and D-Day at Peleliu. For both articles, we not only get her impression of the games but she also provides an after-action report. You’ll get to see how her Marines fare as they wade ashore of Peleliu in a bitter fight against the Japanese in late 1944. You’ll also enjoy her account of the American Revolutionary War while playing the side of the British. It’s asymmetrical warfare – 1770s style!

While our featured game for this issue covers the western front of World War I, Matt Foster talks about a game that deals with the other side of the conflict. Tannenburg: The Introductory Game uses the Der Weltkrieg system to simulate the early battles of the war that occurred here on the Eastern Front. Matt talks about how the rules system attempts to model the complex aspects of the battle and shows us why this title is worth checking out.

Since Yaah! is committed to looking at gaming as a whole, we’ve branched out a little with the types of games we cover with this issue. Duane Woods writes about what it’s like to come back to roleplaying after a long hiatus. He talks about his approach to GMing a game of Star Wars: Edge of Empire and how this structure led to some very interesting situations for his players. Even if you’re not a roleplayer, you’ll find this one funny and fascinating.

In our scenarios section, we have a Heroes of Normandie scenario called Recon designed by Mark H. Walker. Norm Lunde and Brad Smith both throw down with a scenario each for MBT. We’ve got a scenario for the GDW classic Air Superiority based on a well-loved movie from the 1980s. There’s also a solitaire Dungeons & Dragons boardgame scenario for The Legend of Drizzt players.

Whew! I told you this thing was jam-packed. Grab a copy of this as a treat for yourself or someone you like. There’s no gaming magazine quite like Yaah!