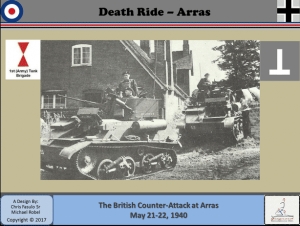 The battle is an interesting situation where the British got the drop on Rommel when the Germans were only considering victory and were too confident of success. This is where Hitler began to get nervous about the ever extending flank of the German armored spearheads. Luckily for the Germans (criminals) the British had poor coordination and poor tanks involved in the attack. While they made the Germans nervous and gave a few units some real problems they didn't have much of a chance of cutting off the German spearheads.

This two day battle is one of the high points of the French campaign for the Allies. Players will each find a tense situation at the beginning. The British must try to push hard as far as they can in order to effect a breakthrough. The Germans must stave off the breakthrough and hold on until help arrives. Rommel sent the 25th Panzer Regiment forward and left the softer elements of the division behind. It's these softer elements that come under attack. The 25th Panzer Regiment is the help and they had to turn around and go back in order to stop the British attack.

Game Turns are 15 minutes; a change from most other Death Ride series games

Most units are platoons, British infantry are companies

Arras - comes with (in Full Color):

(4) Map Sections of the Arras France Area of Operations

(3) Counter Sheets with over 600 Units and Markers

58 Pg. Master Rules (FREE download for those who choose the LITE version)