Accueil > Wargames > One Small Step > If Dragons Fight: China vs. Taiwan in the Near Future

If Dragons Fight: China vs. Taiwan in the Near Future 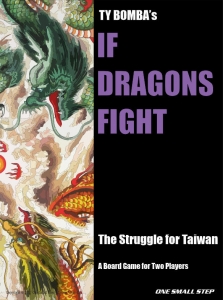 If Dragons Fight: China vs. Taiwan in the Near Future (IDF), is a "what if" simulation of the fighting that could occur across that island, within the timeframe of the next five or so years, if the mainlanders decide political or geostrategic conditions have evolved to where they must resolve the issue finally and by force. Such a situation would most likely occur if either or both the following two developments took place: 1) the Taiwanese officially declared their independence; and/or 2) the mainland Chinese learned the islanders had gotten, or were about to get, nuclear weapons.

This is a two-player wargame of low-intermediate complexity that posits the critical ground-phase of this might-be war as lasting no longer than about two weeks. Such a campaign would most likely have to be preceded by a roughly equal period during which the mainlanders would use aero-naval bombardment to neutralize the ships and planes of the defenders--a long established prerequisite for oceanic invasions of this type.

At the start of the game that preliminary step is presumed to have been completed. The follow-on ground war would likely be supremely violent in regard to how wars have recently been judged, but would have to be limited as to its duration. After a total crisis--aero-naval and ground--of about a month, it's most likely some kind of negotiated settlement would have to be put in place (barring the complete conquest of Taiwan) due to the inescapable economic, political and social disarray both sides would be put through by such a supreme effort.

In sum, then, the Chinese player is attempting to seize as much of the urban area of Taiwan as he can, while his opponent is seeking to contain the invaders' beachhead in as small an area as possible. The operational goal of the Chinese is to seize enough territory to render Taiwan inoperable as an independent polity or, failing that, at least create a lodgment large enough to force the islanders to grant major concessions in order to get them to leave.

Though designed for two-player use, the game is easily adapted for solitaire play.

Both sides orders of battle are drawn from the most recent and complete unclassified sources available. Of course, the overall Chinese ground force goes way beyond the units included in the game. For this invasion, however, about the most that could be supplied would be their airborne divisions, their special forces groups, their marine brigades, their purpose-organized amphibious regular army units, and the line units of the Nanjing Military District. (Due to its proximate geographic location in relation to Taiwan, the NMD would be the higher-level headquarters most likely to be directing this operation.) The entire Taiwanese ground force order of battle--when represented at this scale within these system parameters--is included.

Players will quickly notice there's no possibility for non-Chinese intervention into the air or ground war in the game. That's because it's not reasonable to believe the PRC would risk a wider war by launching this operation unless they'd first managed to diplomatically isolate Taiwan, at least temporarily, while the rest of the world judged whether any aid effort was worthwhile or even viable.

The exception to that is in the cyberwarfare rules. In that arena of "war in the cloud," it seems likely the Taiwanese would have major (though certainly still clandestine) support of many of the world's democratic governments as well as hordes of politically unaffiliated techies. Whether such efforts can prove decisive remains one of the great unanswered questions of 21st century warfare.

Another overarching characteristic of the game is its unforgiving combat resolution subsystem. That is, there's no possibility of retreat from battle: all combat results are sustained as strength losses. That's to reflect the fact we have here two well armed forces, both highly motivated to achieve their objectives, and both armed to the teeth with the most lethal modern weaponry available. At the same time, both militaries would be new to warfare of this intensity.

We're also assuming the invasion isn't being made during the monsoon season, so there are no rules for severe weather.